The mid-point of Ireland’s Wild Atlantic Way, Galway remains one of Ireland’s most celebrated destinations. There’s so much to explore, so you might not have the chance to see it all. But to give you a head start, here are some highlights you won’t want to miss.

Connemara
This is one of Ireland’s most wonderfully scenic destinations. No journey to Galway would be complete without a visit to Connemara. As an area deeply rooted in Irish culture, Connemara is a place where the Irish language is very much the first language. Situated on Galway’s western coast, the Connemara National Park offers ample opportunity to explore a landscape described by Oscar Wilde as “in every way magnificent.” Setting out from the park’s dedicated visitor centre, you can head out on walks of various difficulty up Connemara’s Diamond Hill. Equipped with picnic areas, a children’s playground and a Tea Room, it’s the perfect destination for families wishing to make a day of their outdoor adventuring.

If you’d rather explore the great outdoors from a tee-box, Connemara also offers a spectacular array of links courses for your pleasure. Kylemore Abbey should similarly sit high on the list of anyone planning a trip to the area. Home to Irish Benedictine nuns for almost a century, the abbey’s history goes back fifty years further when it was initially built as a glorious castle. With adjoining Gothic church and Victorian walled garden, it captures the essence of Connemara’s understated attraction.

Check the latest fares to Ireland

Galway City
An exhilarating blend of the historic and contemporary, Galway City is best explored on foot. Shop Street, pretty much as it sounds, is the main retail thoroughfare of Galway. An array of buildings old and new, it’s hard not to get distracted when walking up and down the pedestrianised street. With a variety of street performers, pubs, restaurants and unexpected little shops, you’ll quickly find that all roads in Galway city lead you back here.

When you do venture further afield, there are a number of special spots you should keep in mind. Eyre Square acts as an inner-city public park around which you’ll find no shortage of places to drop in for a nice drink or bite to eat. Built in the 16th century, Galway’s Spanish Arch harks back to a time when the city’s port thrived with the comings and goings of merchant ships.

While you’ll be hard-pushed to find a Galway pub that doesn’t offer some sort of musical accompaniment, if you’re looking for something a little special, the Roisin Dubh is one of Ireland’s best-known venues; music or comedy nights, it’s got you covered. Although you’ll likely find any number of intriguing stops on your travels through the city, special mention is reserved for Charlie Byrne’s Bookshop. One of Ireland’s leading independent book retailers, have a wander around this amazing collection of first and second-hand books.

Aran Islands
Known the world over, the Aran Islands remain one of Ireland’s most captivating destinations for visitors arriving from near and far. Situated off Galway’s Atlantic coast, there are three islands in total – Inis Mor, Inis Meain and Inis Oirr. Each steeped in their own Irish culture, ancient stone forts across the face of Inis Mor, the largest of the three Aran Islands, offer some indication of how long people have called these islands home.

A hugely impressive sight, Dun Aengus remains the most prominent of these forts. Resting on the edge of the island’s cliffs, it’s regarded as one of the finest prehistoric monuments in all of Europe. Explore the cliffs further and you’ll come across the Worm Hole; a natural rectangular shaped pool that has become something of a fascination for those brave enough to dive from the cliff edge into the water below. When it comes to actually getting across Inis Mor, you can see most of it on foot. However, if you do fancy something a little quicker, cycling your way across the island is a great option.

Check the latest fares to Ireland

Galway City Museum
If all this sightseeing makes you keen to learn more about Galway and the people who have inhabited it over the centuries, a visit to Galway City Museum will sort you out. With a number of permanent exhibitions, the museum’s prehistory section tells of the day-to-day lives of Ireland’s first settlers. Artefacts excavated from the surrounding area of Galway’s River Corrib trace human existence here back some 8,000 years, and brings you right up into the Medieval period.

Exploring Galway’s diverse history and the many settlers who have wound up on Ireland’s western front, you’ll also learn of Galway’s involvement in the fight for Irish independence, and those Galwegians who spent a portion of this period fighting during the Great War. Drawing reference to Galway’s immensely impressive legacy as a sporting county, the museum also offers a fascinating insight into a Galway side that claimed three All-Irelands in succession during the 1960s. Should you find yourself confined to indoors by the occasional wet weather in the West of Ireland, the city’s museum is a great way to spend an afternoon in Galway.

Possible destinations…
With such an array of activities on offer in Galway, there are some other spots you should keep in mind. If you’re a sports fan, you’ll not have to travel too far to find something you like. In terms of GAA, Galway’s hurlers, footballers and camogie players are all flying high at the moment and it’s well worth seeking out a game if you’re visiting during the summer months. Alternatively, the county plays host to Connacht Rugby; one of Ireland’s four professional rugby union sides. You also have the option of Galway United, who play in the League of Ireland First Division.

If you’re using Galway city as a hub for your visit, there’s no shortage of day-trips available. You’ll be in close proximity to Ireland’s famous Cliffs of Moher in County Clare, the ancient Ceide Fields in County Mayo and, if you’ve not had your fill of island adventure, you could always visit Achill.

We operate direct flights from New York JFK and Boston to Shannon. Galway is easily accessible by hire car or public transport links at Dublin and Shannon Airport.

Read next: The seven most Instagrammable spots in Dublin. 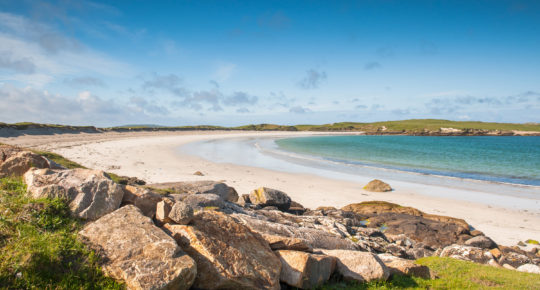